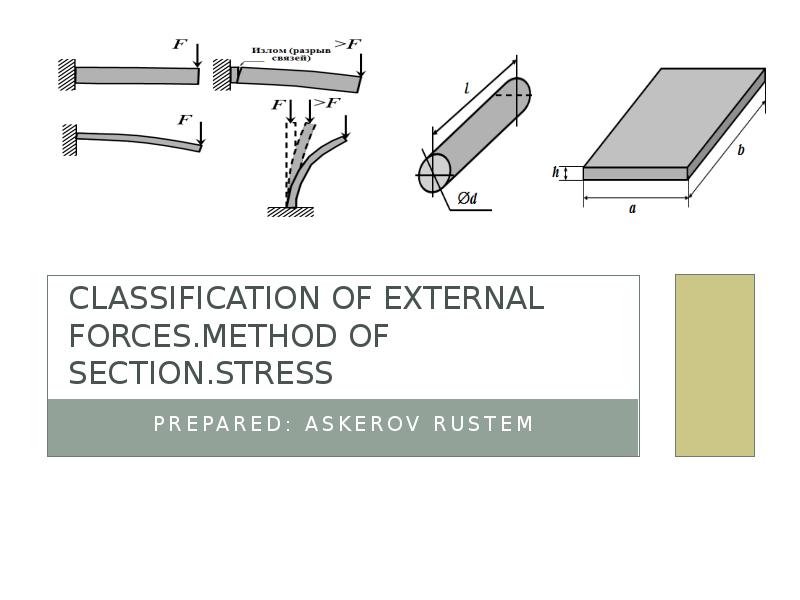 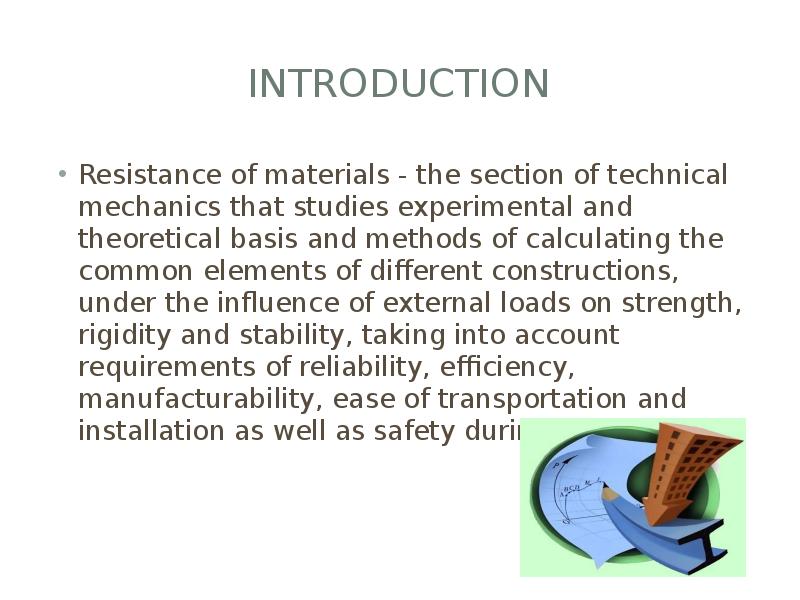 Рис.2 introduction Resistance of materials - the section of technical mechanics that studies experimental and theoretical basis and methods of calculating the common elements of different constructions, under the influence of external loads on strength, rigidity and stability, taking into account requirements of reliability, efficiency, manufacturability, ease of transportation and installation as well as safety during operation. 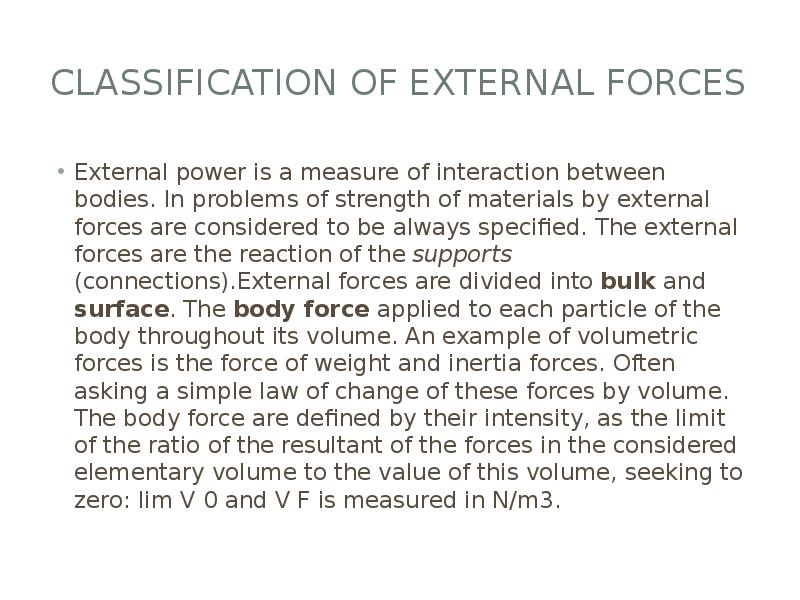 Рис.3 Classification of external forces External power is a measure of interaction between bodies. In problems of strength of materials by external forces are considered to be always specified. The external forces are the reaction of the supports (connections). External forces are divided into bulk and surface. The body force applied to each particle of the body throughout its volume. An example of volumetric forces is the force of weight and inertia forces. Often asking a simple law of change of these forces by volume. The body force are defined by their intensity, as the limit of the ratio of the resultant of the forces in the considered elementary volume to the value of this volume, seeking to zero: lim V 0 and V F is measured in N/m3. 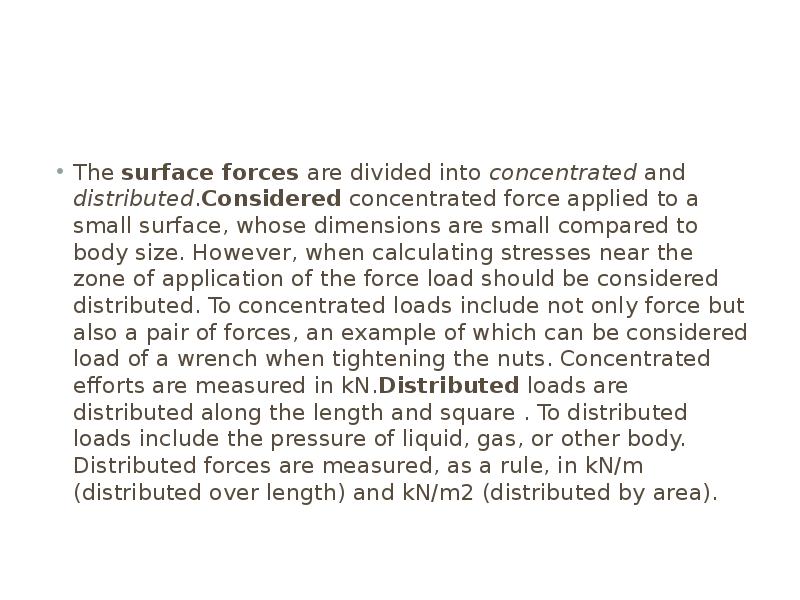 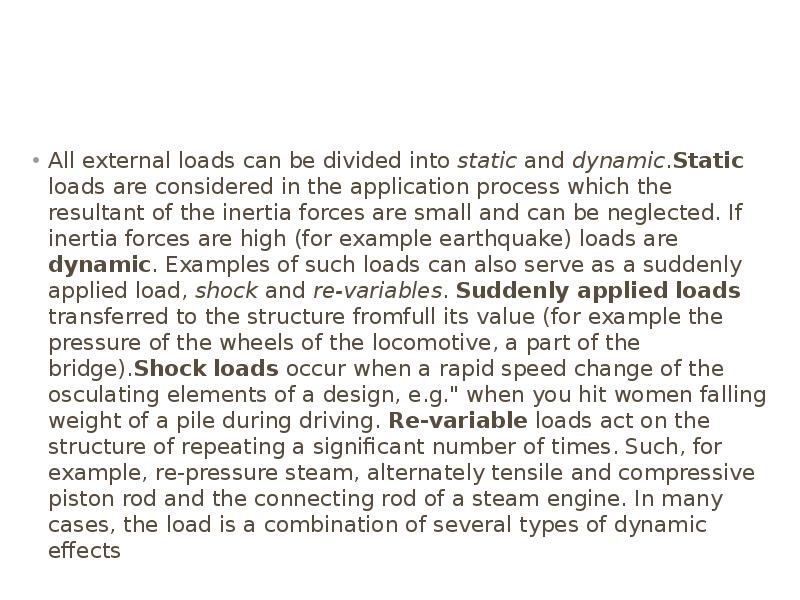 Рис.5 All external loads can be divided into static and dynamic. Static loads are considered in the application process which the resultant of the inertia forces are small and can be neglected. If inertia forces are high (for example earthquake) loads are dynamic. Examples of such loads can also serve as a suddenly applied load, shock and re-variables. Suddenly applied loads transferred to the structure fromfull its value (for example the pressure of the wheels of the locomotive, a part of the bridge). Shock loads occur when a rapid speed change of the osculating elements of a design, e. g. " when you hit women falling weight of a pile during driving. Re-variable loads act on the structure of repeating a significant number of times. Such, for example, re-pressure steam, alternately tensile and compressive piston rod and the connecting rod of a steam engine. In many cases, the load is a combination of several types of dynamic effects 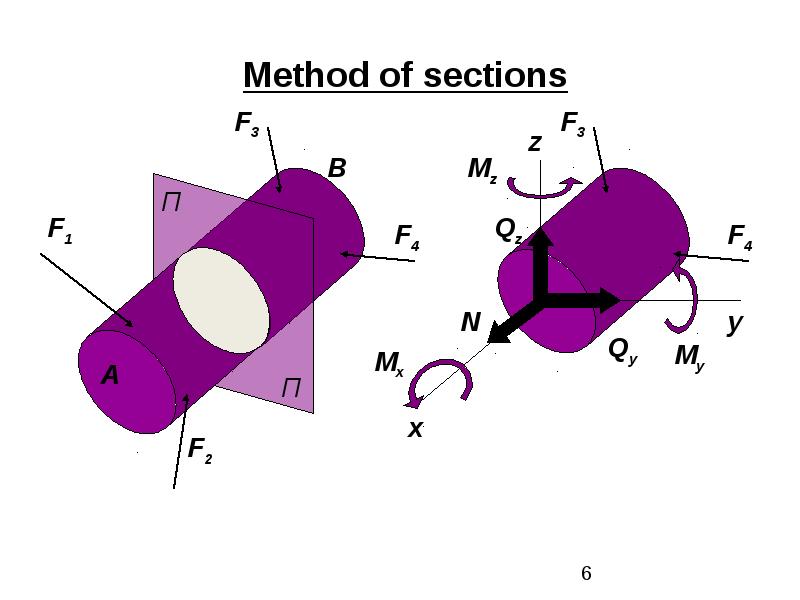 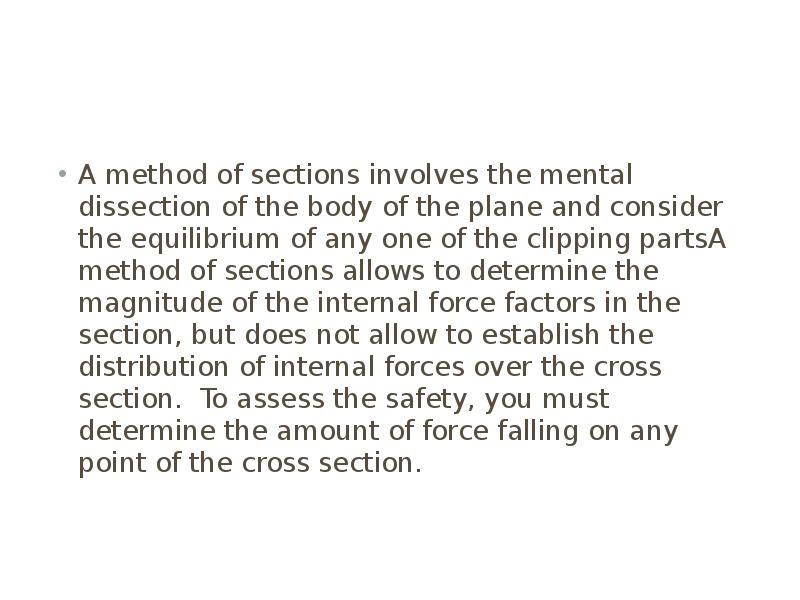 Рис.7 A method of sections involves the mental dissection of the body of the plane and consider the equilibrium of any one of the clipping partsA method of sections allows to determine the magnitude of the internal force factors in the section, but does not allow to establish the distribution of internal forces over the cross section. To assess the safety, you must determine the amount of force falling on any point of the cross section. 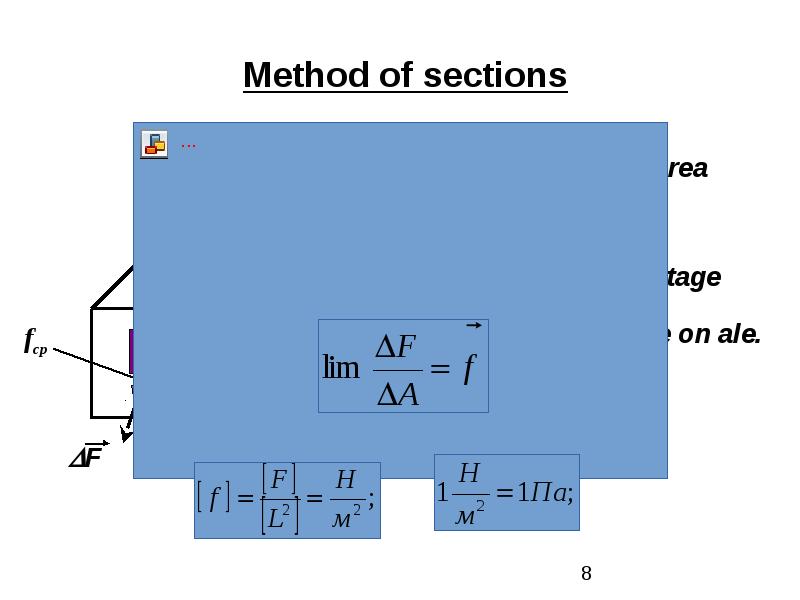 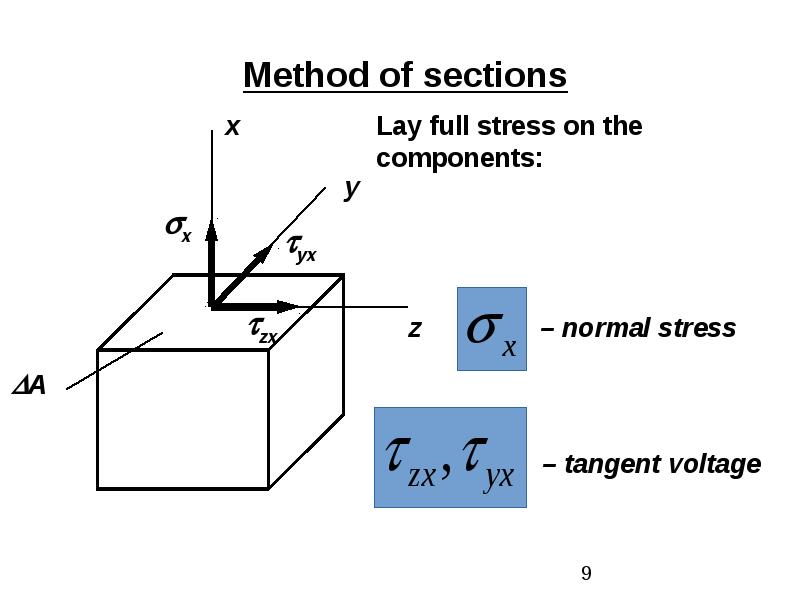 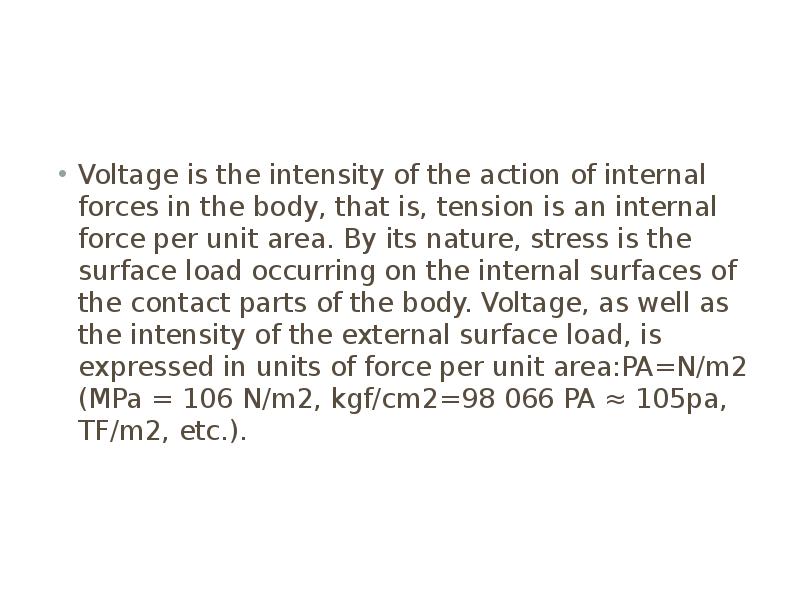 Рис.10 Voltage is the intensity of the action of internal forces in the body, that is, tension is an internal force per unit area. By its nature, stress is the surface load occurring on the internal surfaces of the contact parts of the body. Voltage, as well as the intensity of the external surface load, is expressed in units of force per unit area:PA=N/m2 (MPa = 106 N/m2, kgf/cm2=98 066 PA ≈ 105pa, TF/m2, etc. ). 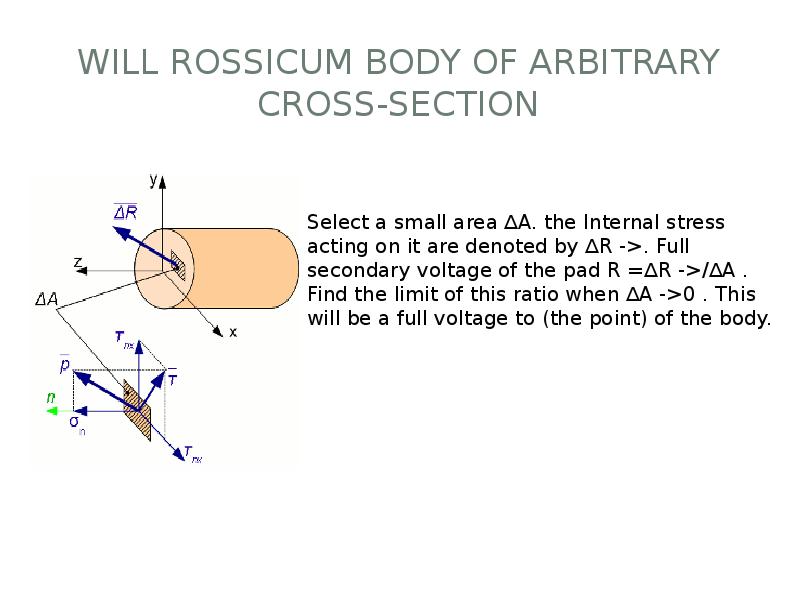 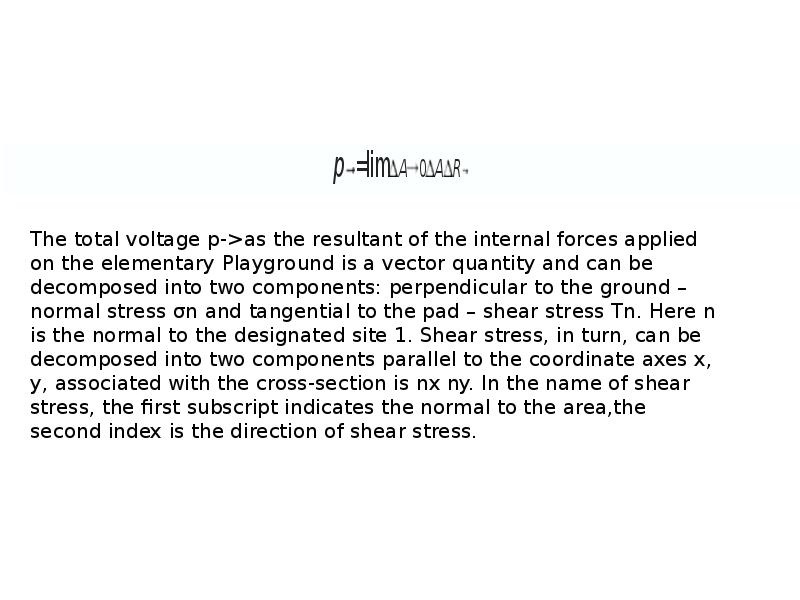 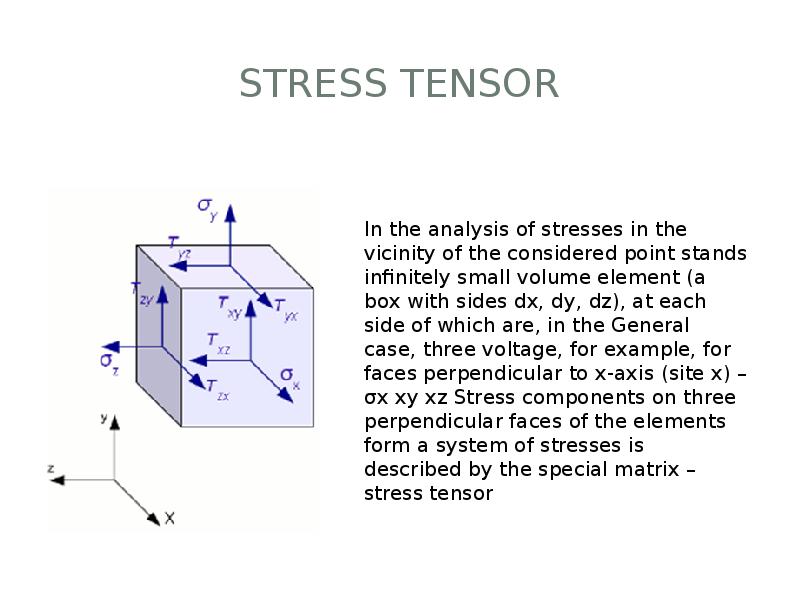 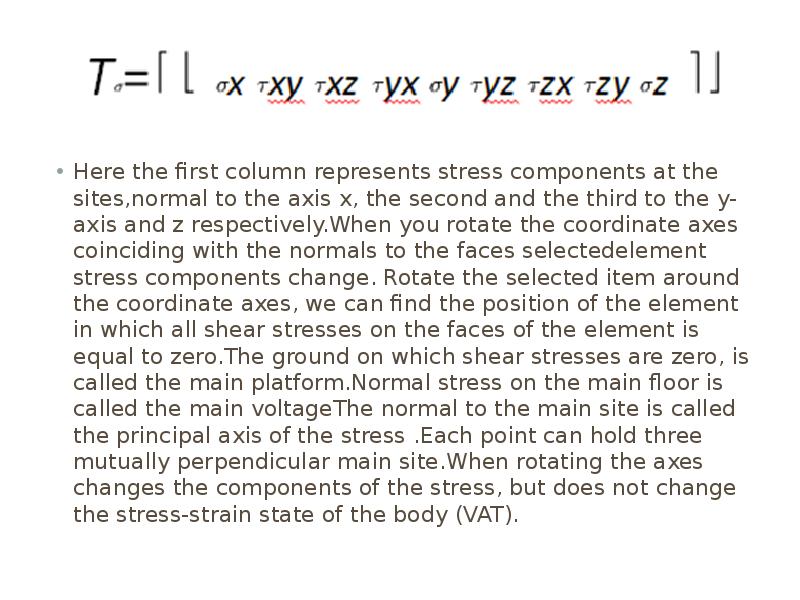 Рис.14 Here the first column represents stress components at the sites,normal to the axis x, the second and the third to the y-axis and z respectively. When you rotate the coordinate axes coinciding with the normals to the faces selectedelement stress components change. Rotate the selected item around the coordinate axes, we can find the position of the element in which all shear stresses on the faces of the element is equal to zero. The ground on which shear stresses are zero, is called the main platform. Normal stress on the main floor is called the main voltageThe normal to the main site is called the principal axis of the stress . Each point can hold three mutually perpendicular main site. When rotating the axes changes the components of the stress, but does not change the stress-strain state of the body (VAT). 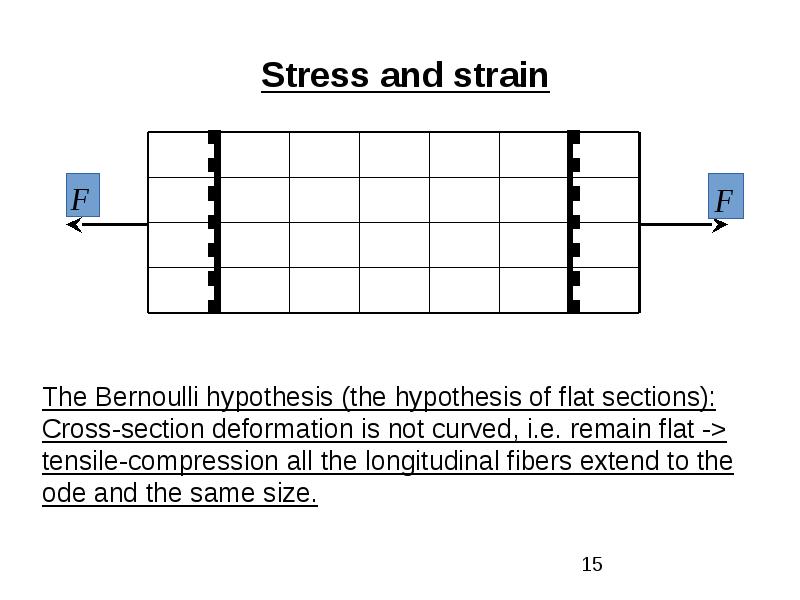 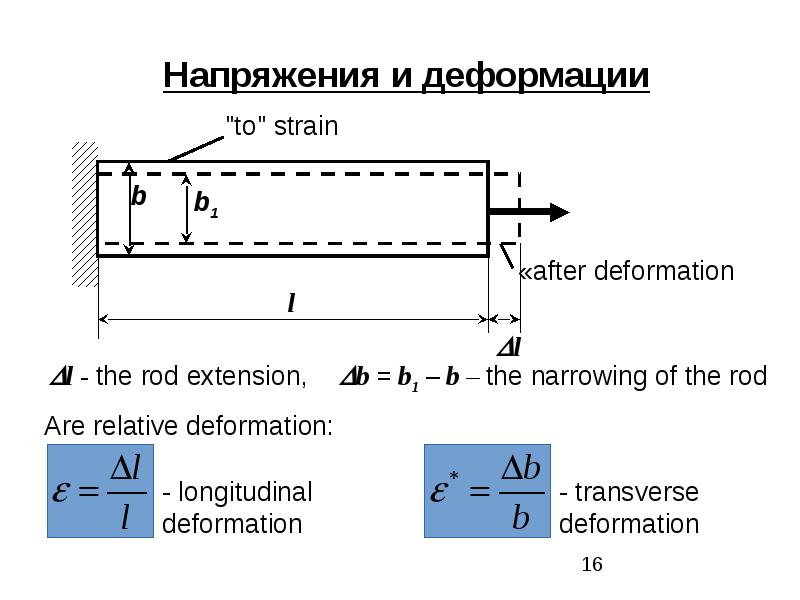 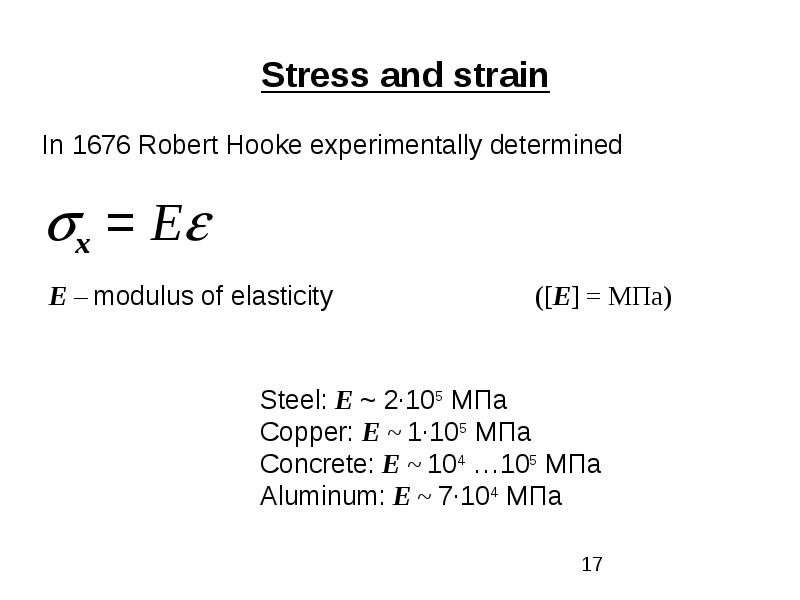 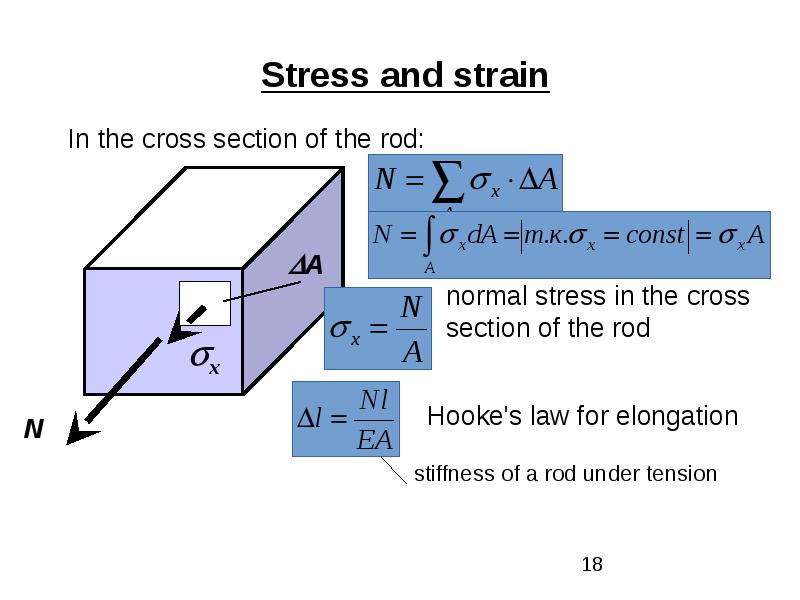 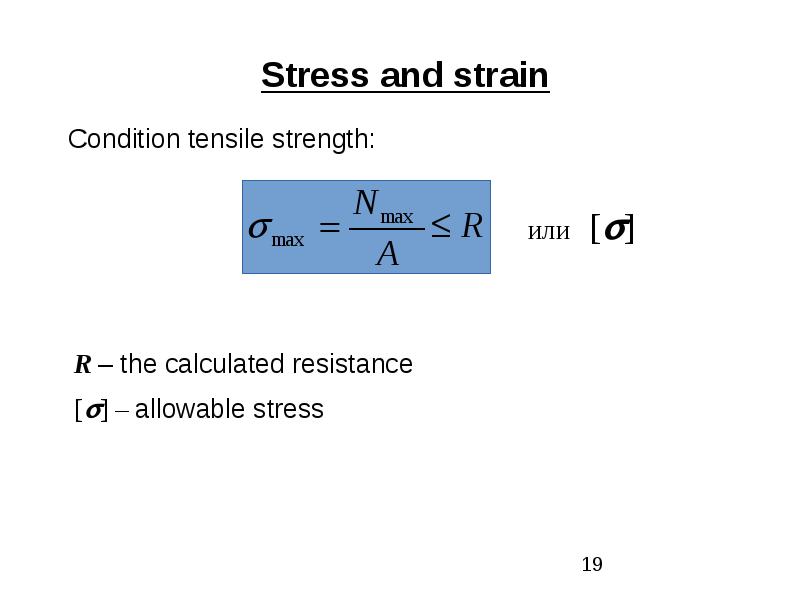